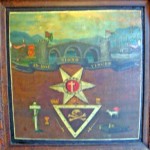 Meets at Masonic Hall, Youghal
Meets second Wednesday of March,
May, September and November at 8pm

Royal Arch Masonry in Youghal was known as early as 1743 – the earliest verifiable reference to this branch of the Masonic Order in Ireland.

‘A great St John’s Day (27 December 1773) procession was held in the town of Youghal when the Masonic lodge (No. 19, warranted in 1733) met, after which the procession left the lodge premises and marched through the town to the church for service. The town was en fete; ships in the harbour were decorated and fired a salute of guns, while flags and bunting were everywhere displayed. The procession was headed by a band of musick, deacons and wardens carried their mauls and badges of office, the worshipful master being preceded by a Royal Arch.’

Royal Arch Masonry was also present in the second oldest warrant held at Youghal – that of No. 504. An old certificate in our possession, hanging framed in our lodge room, states

Our own Royal Arch Chapter No. 68 was warranted in 1835 – the same year as our lodge – and possesses a replica of the ancient breastplate worn by the High Priest in biblical times. Known as the Breastplate of Judgement, it is studded with twelve jewels on a brass plate, representing the twelve tribes of Israel. Originally this was made of rich cloth embroidered with gold thread and was worn in the form of a pouch or bag, in which were kept the lot stones. The High Priest alone wore this on his breast and whenever some point or problem arose, he would cast or draw out one stone, and so resolve the situation.

Our ornamental breastplate is a rare survivor of an ancient tradition in Royal Arch Masonry. Similar breastplates are in the possession of some sister chapters in other jurisdictions, and an old example may be seen in the Grand Lodge of Ireland Museum, 17 Molesworth St., Dublin. The Breastplate of Judgement – as this emblem is called, at least in Masonic circles – is referred to in the Old Testament, in Exodus Chapter 28, beginning to read at Verse 1.

As with Munster Craft Masonry, the Royal Arch branch is clearly closely linked with our brethren in Bristol, with which the ports of Cork, Youghal and Kinsale had early established trading links.

All visiting Royal Arch Masons are welcomed at Convocations of Royal Arch Chapter No. 68, and all Master Masons – of at least one years standing who are not already members of this branch of the Masonic Order – are warmly encouraged to apply for membership.