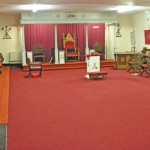 Click here to read a welcome address by the Most Excellent District Grand King.